Here at Maggie’s our days usually start around 6:30 in the morning and conclude with the end of chores around 5:30 just before the evening begins. At this time of the year, the days are long and they are pretty much mapped out weeks in advance largely because we are at the peak of seeding in the greenhouse and transplanting out in the fields. The last six Tuesdays, however, have been a little different. Though we still got up at our regular time and did our normal morning chores, we dedicated the afternoons to our own independent projects.

As part of the Learn to Farm Program, we have had a total of six Tuesday afternoons set aside to focus on our own projects. We submitted our proposals back in late March and began our projects at the end of April. My fellow classmates have worked on a wide range of endeavors that have included everything from growing mushrooms to creating music around the farm. Tuesday mornings have been filled with a new kind of enthusiasm as we all talk about our plans for the afternoon over morning chores and breakfast.

Having sole ownership over Tuesday afternoons has been one of my favorite parts of the program here at Maggie’s. I have thoroughly enjoyed not only working on my own idea and taking the steps for its further development, but also seeing and hearing about the projects that my fellow classmates have chosen to further pursue. Tuesday afternoons have provided new insights into my classmates’s personal passions as well as their processes for making them all come to live.

At the beginning of the year, Robyn began the process of organizing the seeds that she had brought with her from Arizona. The colors of all the different kinds of beans and corn are mesmerizing. Even before Robyn arrived at the farm, she had a vision of sharing her bean and corn seeds with the Learn to Farm Program. As part of her independent project, Robyn organized and labeled her corn and bean seeds, and has also started the process of direct seeding them into the ground here at kitchen garden at Maggie’s. 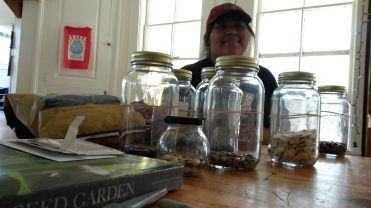 Robyn organizing her seeds before direct seeding them in our kitchen garden.

Robyn sharing about her independent project.

Erica has worked non-stop on mushroom inoculation using wood chips, straw and coffee grounds as growing mediums. The kitchen at times has had the appearance of an amazing laboratory experiment as Erica sterilized straw in giant pots for her oyster mushroom mycelium. Blue buckets with drilled holes also started appearing on our porch and common areas. The east side of our home at Maggie’s is now home to brand new wood chips inoculated with wine cap mushrooms and as well as a beautiful re-designed landscape. Words cannot express the joy that Erica shared with all of us as her first mushrooms appeared in one of her blue buckets filled with straw.

First mushrooms from one of the straw buckets!

Urban farming comes with different challenges than rural farming and Chanelle has been working on addressing some of these as part of her independent project. For one, finding the space to plant in a city is definitely a never ending puzzle of all sorts which is also usually followed by  having to deal with contaminated soils. To address concerns of space and heavy metals (mainly lead) in the soils, Chanelle built a raised bed and is using the square foot gardening method to maximize food production. 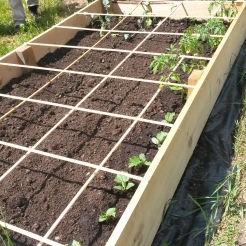 Chanelle sharing with us her independent project.

Though we officially concluded our independent project program time by sharing with the community, many of our projects are in a lot of ways a beautiful work in progress.

👋from Tom and King on this lovely snowy morning #breakfastofchampions #draftpower #farmschoolpvs
Registration for our winter meat share is open! Enjoy five or six monthly deliveries of pastured pork, grass-fed beef, grass-fed lamb and eggs. Pick up in Watertown or on the farm in North Orange starting December 12th. For more information or to sign up, follow the link in our bio!
Giving the beef herd some ❤️ what a view from the Waz barn! #reddevin #orchardgardens #4thgrade #farmschoolpvs
Fridays are for belly rubs #bestfriends #snuggles #joy #love #farmschoolpvs
It's officially time to think about next summer! Want to come or know of someone who wants to come to summer program at the farm?? Sign up starts TODAY :) check us out online farmschool.org/summer We hope to see you there! #farmschoolpvs
Introducing --our first official product from The Farm School Dairy-- Yogurt! We've milked cows here for ages, and now with our new pasteurizer the students have the chance to enjoy products from the cows they have milked, groomed, and given so much love to #fullcircle #farmfreshyogurt #jerseymilk #farmschoolpvs
Comeoooooon cooooooows #shadyhillschool #farmwork #farmschoolpvs
Former Farm School Chef Aly Lopez is doing big things in Somerville! We're missing her dearly, but check out @nibble.kitchen - a restaurant that has rotating menus from chefs from around the world! It's located at @bow.market and she hopes to see you there :)
"They call me... The Chicken Tender" #morningchores #chickentenders #northquabbin #farmschoolpvs #nativityprep
It's barn kitty Cyrus's social media debut! Nativity prep kiddos showing SO much love to this sleepy kitten #barncat #snuggles #farmschoolpvs
Pre- and post-graduation 🥳 The Student Farmers in the Learn to Farm class of 2018-2019 graduated this past weekend. Congrats StuFas! Can’t wait to see what you do next! #thefarmschool #learntofarm #studentfarmer
Snack time for the calves! It was so nice having the Gordon School here this week to share in all the magic! Take a look! #riceharvest #carmenshoney #thanksbees #cinnamonrolls #farmschoolpvs